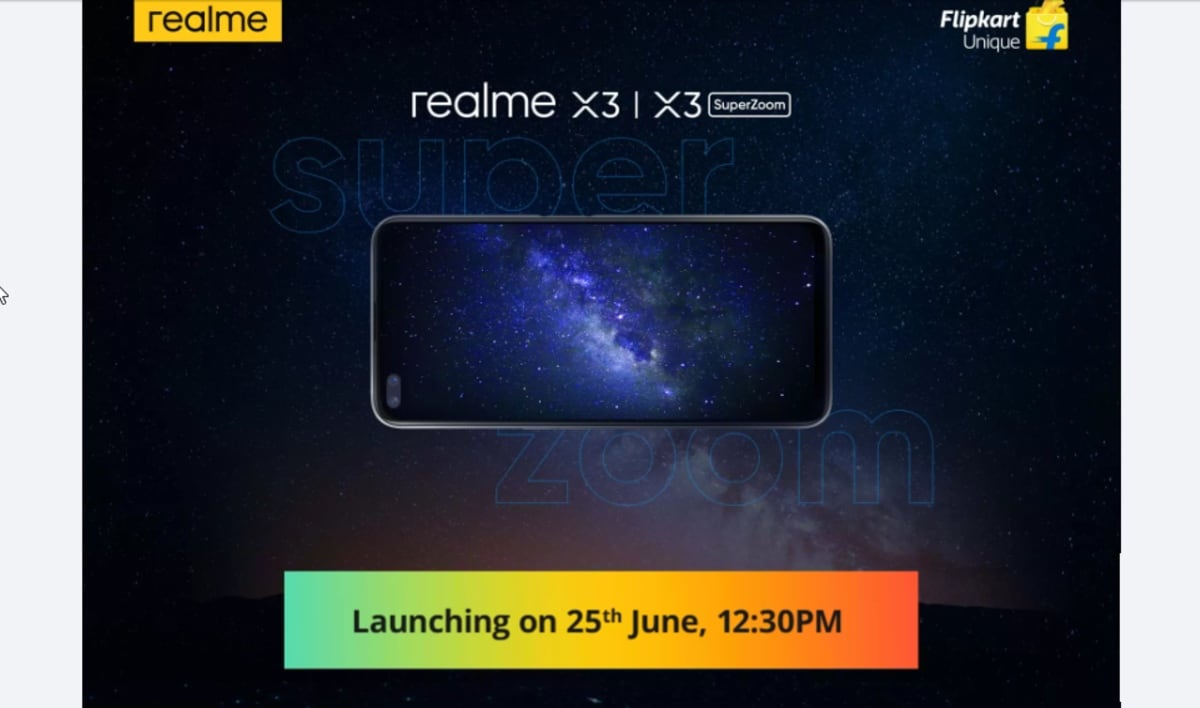 Realme X3 SuperZoom and Realme X3 phones are set to launch in India on June 25. Ahead of that, Flipkart has now made a dedicated page live teasing the upcoming availability of the two phones. The e-commerce giant is also teasing key features of the Realme X3 SuperZoom model. The Realme X3 SuperZoom has already launched in Europe last month, and is now coming to the Indian market. Realme India Chief Marketing Officer Francis Wang recently suggested that the India model may come with different specifications than the Europe model.

Flipkart has published a dedicated teaser page for the Realme X3 and Realme X3 SuperZoom launch in India. The teaser page reiterates that the two phones will launch in India on June 25 at 12.30pm IST. The page teases Realme X3 SuperZoom camera features like its zooming capabilities and the Starry Mode feature for capturing the night sky. It also teases the Nightscape 4.0 mode for low light photography and has shared camera samples for all of these features.

Realme X3 is tipped to feature a 6.57-inch full-HD+ (1,080×2,400 pixels) hole-punch display, an octa-core SoC, up to 12GB of RAM, and up to 256GB of onboard storage. It is also likely to pack a quad rear camera setup with a 48-megapixel primary shooter and an 8-megapixel secondary shooter. The Realme X3 is said to have a dual selfie camera setup with a 16-megapixel primary camera and a 2-megapixel secondary camera. There could be a 4,100mAh battery packed inside as well.

Specifications of the Realme X3 SuperZoom are already known. It features a 6.6-inch full-HD+ (1,080×2,400 pixels) display and is powered by the Qualcomm Snapdragon 855+ SoC. The phone packs up to 12GB of RAM, and up to 256GB of onboard storage. There is a quad rear camera setup that includes a 64-megapixel primary camera and an 8-megapixel secondary camera with a periscope-style lens setup to enable 5x optical zoom and 60x digital zoom. The dual selfie camera setup includes a 32-megapixel sensor and an 8-megapixel sensor. The Realme X3 SuperZoom packs 4,200mAh battery that supports 30W Dart Charge.

Realme X3, Realme X3 SuperZoom Teased on Flipkart Ahead of Launch
No Comments