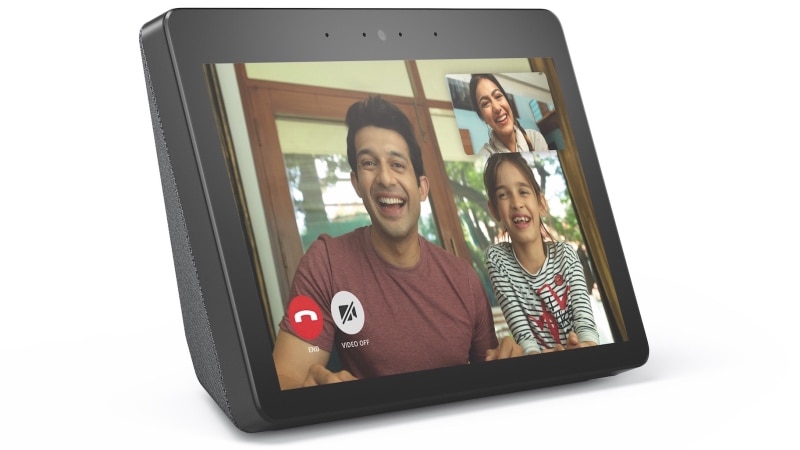 Amazon has been slowly expanding its range of hardware products in India, and now sells a range of Echo smart speakers and Fire TV streaming sticks in the country. The company has now expanded its product range to include the second-generation Amazon Echo Show, a smart display with a 10-inch screen and Dolby-tuned speakers. The Amazon Echo Shows goes on sale starting today at Rs. 22,999 on Amazon India and select retailers, and will ship immediately across India. It joins the Echo Input, Echo Dot, Echo, Echo Spot and Echo Plus in the company’s Echo devices portfolio.

The second-generation Amazon Echo Show was launched in the United States in October 2018, and makes its way to India a few months after. The speaker is similar to the Amazon Echo Spot which was launched last year and features a circular 2.5-inch display. The Echo Show has a fabric design and a much larger 10-inch HD-resolution screen, which allows for a variety of functions including fetching audio and video content using the Alexa voice assistant, video calling, home surveillance, and more.

Apart from the screen, the speaker features a Dolby-tuned speaker system, Bluetooth and Wi-Fi connectivity, and Zigbee architecture for home automation and smart home functionality. The device also has eight microphones for far-field voice recognition, which enables the speaker to listen to voice commands across large distances, and also capture sound during voice and video calls. The device has a 5-megapixel camera at the front to enable video-based features such as voice calling.

The Amazon Echo Show 2nd-generation can be used to watch movies and TV shows on Amazon Prime Video, view Facebook photos, movie trailers, and video news bulletins using the screen. Apart from that, it can be used to give you visual information to queries to Alexa, Amazon’s AI-based voice assistant. You can also use the device as a standalone speaker similar to the Echo, Echo Dot and Echo Plus speakers, to fetch music from a handful of music streaming services such as Amazon Prime Music, Ghana, and JioSaavn. You can also access the web through the built-in web browser.

There are also various Alexa skills which can be customised based on your needs. The Amazon Echo Show will let you shop online, book a cab using Ola, get news updates and food recipes, among other things. The device can also be used along with other Amazon devices such as the Amazon Echo speaker range and Amazon Fire TV Stick range.

The Amazon Echo Show 2nd generation is being launched with a handful of launch offers. Buyers will get a free Philips Hue smart lightbulb with the Echo Show, flat Rs. 2,000 cash back on purchase with Citibank credit and debit cards, and no-cost EMI schemes on purchases with cards of leading banks.

Affiliate links may be automatically generated – see our ethics statement for details.