Fashion Punk, prints and ponchos: who won the fashion match at Wimbledon?

In 2013, Roger Federer wore orange-soled Nikes on Centre Court and ruined Wimbledon for everyone – in 2014, the committee implemented an “almost entirely white” accessory rule on court. Still life finds a way, with players on court and attendees in the Wimbledon frow exploiting stylistic loopholes in ever more ingenious ways. 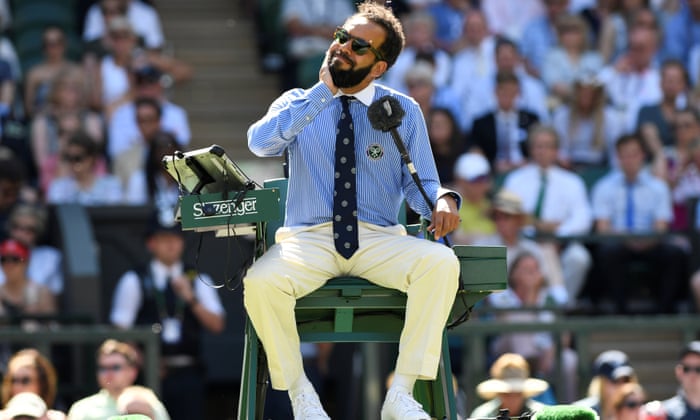 Svetlana Kuznetsova, the Russian No 7 seed, has a tattoo that reads “Pain doesn’t kill me, I kill the pain”, another that says “Only God is our judge” and a picture of a tiger on her belly. Yesterday, she capped this with a single safety-pin earring. Punkish semaphore, homage to Ivanka Trump or nod to autumn/winter 2016 Balenciaga and Sonia Rykiel? Given that the piercing is gold, possibly by Ileana Makri and, if so, cost $200 (£155), our money is on the latter.

Visors are the new baseball caps

Worn by Jeremy Corbyn in a train toilet and seen in Versace’s spring/summer 2017 collection, it feels premature to say caps are on the wane, but here we are: this year, visors were ahead, at least for women. See fans Johanna Konta, Svetlana Kuznetsova and Venus Williams, whose hat barely contained her lavish Versaillian up-do.

This year, the Serb titan switched from Uniqlo to Lacoste, both decent sponsors, and both more athleisure than sportswear. The sight of Novak in a crisp white Lacoste polo certainly took the edge off his complaints about a hole in the courtand the decision to delay his match.

Excellent to see attendees making heightened security work for them – visible tags on lanyards are now essential. Their giant lobster clips are also in fashion, from Fendi to H&M to Anna Wintour, whose bejewelled print dress offset the green strap.

Screw the granular scrutiny over her appearance – last night, 2013 winner Marion Bartoli wore a Chanel necklace while punditing, and recycled it again on This Morning. Bartoli: practically trolling her critics with her fruity accessorising.

Commentator David Law declared the Chelsea Pensioners “the best dressed people at Wimbledon” owing to their red and black uniform. But they have nothing on umpire Kader Nouni’s pairing of a contrast-collar shirt with sunglasses, which screamed off-duty banker on a boat. It even appeared to inspire Ian McKellen and Cliff Richard’s Jermyn Street check. Works for us, lads.

Prints are an ever-present sight on the frow, and a surefire way of getting spotted by the cameras. So who won at Wimbledon – Carole Middleton in a restrained blue print dress? Maggie Smith in polka dots? Miroslava Federer in jumbo green leaves? Or Anna Wintour in her modernish shift dress with bejewelled collar? Wintour, obviously. Best hair, too.

AKA hiking chic. Gorpcore was tipped to be the trend of the year, but has yet to take off because the weather has been decent. Except for yesterday, when the heavens opened, as did queuers’ umbrellas, bright ponchos and tents. Finally, something predictable happened at Wimbledon.