NEW DELHI: Sales of fast-fashion and lifestyle brands in India dropped by about a fifth in July despite eye-popping discounts, with industry experts attributing the decline to shoppers having advanced their purchasing to June before the national rollout of the single producer levy. The Goods and Services Tax (GST), which kicked in from July 1, involves a tax incidence of 12% instead of 5%.

“The reason for the drop could be that the industry had advanced the sales (to June),” said Jacob John, deputy chief executive of Lifestyle department stores chain.

At his stores, July sales were only marginally lower at about 5%. “This year, Eid was in June. So, some amount of Eid business also shifted to June and it was a good June for us,” John added.

Even though taxes on branded garments costing more than Rs 1,000 were raised from 5% to 12% after the GST was introduced, retailers from Levi’s to Lifestyle say they still haven’t increased the prices and are currently absorbing the differences in taxes themselves rather than passing them on to the consumers. 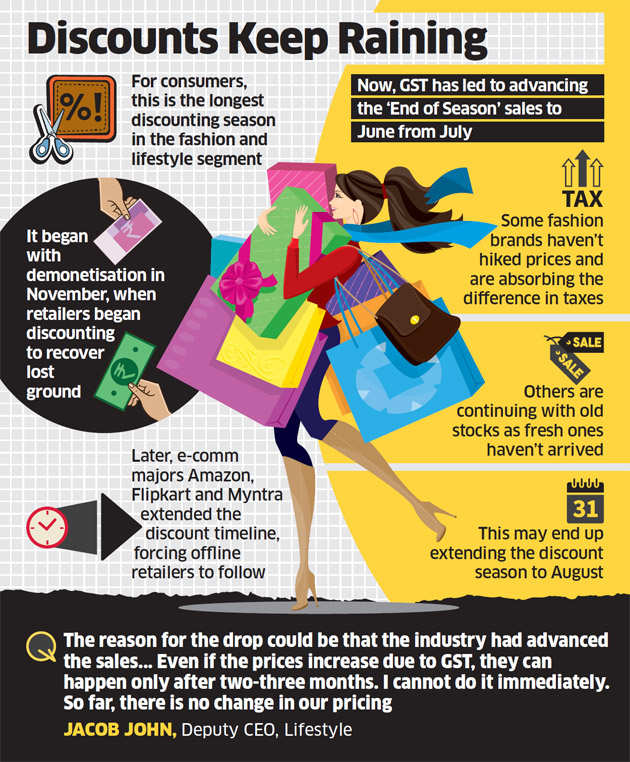 “Even if the prices increase due to GST, they can happen only after two-three months. I cannot do it immediately,” said John of Lifestyle. “So far, there is no change in our pricing.”

On Tuesday, Levi’s, Benetton, Gap, Aldo, Marks & Spencer, Pantaloons, and Lifestyle offered flat 50% discounts at the Mall of India in Noida. A host of other brands, including US Polo, Tommy Hilfiger, Aeropostale, and Calvin Klein offered up to 50% discounts. An executive at a Zara store in the National Capital Region said the sale could continue until August depending on how long the stock lasts.

Extended run of discounts
India is witnessing one of the most-extended discounting seasons from fashion and lifestyle brands since November – first due to the demonetisation and now because of the GST. The introduction of the single levy has prompted retailers to advance their annual discounting season by a month to June.

“I haven’t seen so many discount sales since the 2008-09 Lehman Brothers crisis when retailers were left with excess inventory and the market was bad, sentiments were down and malls got deferred,” said the chief executive of a global lifestyle brand, requesting anonymity.

Retailers say that they had overcome the impact of demonetisation and were looking forward to better business this financial year. However, with e-commerce companies Amazon, Flipkart and Myntra continuing to offer discounts, brick-andmortar stores had to stay competitive and offer major cuts.

“Challenges were there — be they demonetisation or the GST — and if we don’t respond adequately, we’ll be in trouble,” said Vishnu Prasad, chief executive of the Future Group-owned Central malls. Central advanced its sales season by a week to June 19. Before that, it had promotional events over various weekends.

Advancing the ‘End of the Season’ sale has disturbed the annual business cycle, which involves new ranges hitting the shelves in August.

“This time, new stocks are not coming because of the GST,” said the CEO of the global brand quoted above. That means the discount season will continue in July and may even spill over into August.

Vishnu Prasad said Central has a “tentative plan” of ending the sale by July 31. “It depends on how the rest of the days in July shape up,” Prasad said.