Céline Dion: Canadian, excessively enthusiastic, big warbling voice. This much we know. But are you aware that the voice of the 90s has latterly become the poster girl for avant-garde fashion label Vetements?

Riding high after her first appearance at the Met Gala this year, to which she wore a deconstructed Versace gown with a higher-than-thigh-high slit, this week Dion has been fraternising with Anna Wintour on the frows in Paris, given the Giambattista Valli’s haute couture show a standing ovation and been photographed naked for US Vogue’s Instagram account.

Close watchers of Dion’s career would not be surprised to discover that she likes fashion. For the past five years, she has been almost exclusively wearing couture to perform in Las Vegas, by the likes of Armani Privé, Schiaparelli and Versace. But it wasn’t until last year that her more surprising, leftfield fashion credentials crystallised.

First, she was spotted in a leather trench coat made by Off-White, the in-the-know brand run by Kanye West collaborator Virgil Abloh. Next, she was snapped in a neon yellow dress made by Balenciaga, which was very meaningful because the house had recently hired an ice-cool creative director. By Vogue’s estimation, Dion was “the first celebrity to wear any new Balenciaga piece under Demna Gvasalia’s creative direction”. Adopting the Balenciaga look – a so-cool-it-hurts penchant for the ugly-on-purpose – is an unexpected twist for a celebrity best known for belting out power ballads. 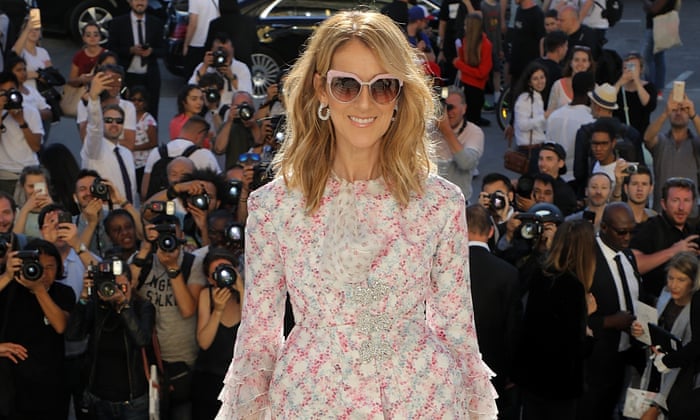 Soon after that, things got meta. Vetements created a cult, merch-style hoodie, emblazoned with a picture of Kate Winslet and Leonardo DiCaprio in Titanic. And in a seminal moment of self-reference last summer, Dion wore it on the streets of Paris, showing she had the chops to not only be a fashion icon, but one who could rise above the parapet and have a laugh at the same time.

All of this is evidence of her new status as everything the fashion industry never knew it wanted. A message that was firmly underlined during the haute couture shows this week, when Dion’s unbridled zeal for frocks in the front row earned her the vital key for anyone wanting to reach iconic status in 2017: a hashtag. Specifically: #celinetakescouture.

A lot of people are putting this sartorial renaissance down to Dion’s stylist of the last year, Law Roach, who calls himself an “image architect” – look to the bulbous, domed sleeves of Dion’s gown at the Billboard music awards and you can see why that’s a fitting description. But for those who have been backing Dion since her It’s All Coming Back to Me days, it’s obvious she has always had a knack for head-scratching fashion – her backwards tuxedo look on the 1999 Oscars red carpet is one of the key reasons that year has gone down in history as such a big one.

Now, even Drake, the meme king himself, has said he is thinking about getting a tattoo of Dion. Clearly, there is something ironic in the cool kids’ adoration of the queen of thumbs-up enthusiasm and middle-of-the-road music. But with her whoops and beaming smiles and giddy exuberance in the face of what can – at times – be a very po-faced industry, she might be the fashion icon 2017 so badly needs.