HIGHLIGHTS
Samsung Galaxy Tab S3 was globally unveiled at MWC 2017
It sports a 9.7-inch QXGA Super AMOLED display
It was launched in Wi-Fi only and LTE variants
Samsung Galaxy Tab S3 was launched in India on Tuesday at an event in Bengaluru. The productivity-focused tablet was first unveiled at MWC 2017 in Wi-Fi and LTE variants. It will be made available in India via offline retail stores and the Samsung India site from Tuesday itself.

The highlight of the Samsung Galaxy Tab S3 is the inclusion of the S Pen stylus (featuring a 0.7mm tip and 4,096 pressure levels), as well as an all-new glass design. The tablet also offers HDR video playback capabilities, and a quad-speaker system that has been tuned by AKG.

Other Samsung Galaxy Tab S3 features being touted by the company include the Galaxy Game Launcher (with Power Saver, Mute Games, and Ongoing Calls modes). The tablet also supports a Keyboard Cover that’s sold separately. Finally, the company is touting the up to 12-hour battery life, powered by the 6000mAh battery onboard.

As for launch offers, the Samsung Galaxy Tab S3 gets a double data offer for Reliance Jio users, providing 28GB + 28GB per month at Rs. 309 – this offer is valid till December 31. The company is also offering a one-time screen replacement at Rs. 990 for tablets bought before July 31, for 12 months from purchase. 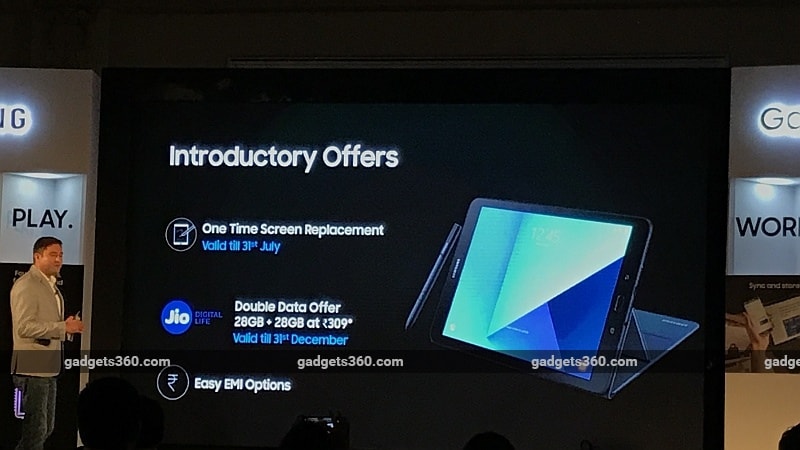 Moving along, the Samsung Galaxy Tab S3 connectivity options include 4G LTE, Wi-Fi 802.11 a/b/g/n/ac, Bluetooth v4.2, USB Type-C (3.1) port, and a 3.5mm audio jack. As we mentioned, the Samsung Galaxy Tab S3 battery is rated at 6000mAh. It measures 237.3x169x6mm, and weighs 429 grams for the Wi-Fi only variant, and 434 grams for the LTE variant. The latter variant supports Nano-SIM cards. It bears a fingerprint sensor on the Home Button. The tablet runs Android 7.0 Nougat.