The Moto G4 is no longer Lenovo’s top budget phone. That position has been taken by the Moto G5 – or more accurately, it should be, but isn’t somehow.

Conventional wisdom says that phones should improve year-on-year, but the Moto G5 is actually a step backwards. A small one, but a step backwards all the same. The semi-metal design makes it look a bit nicer, but in terms of performance, it’s pretty much the same as the Moto G4 – in fact in some, it was marginally worse, and it loses some of the battery life too.

Given the RRP is the same, you might think the Moto G5 would still be the one to go for, but realistically we know that prices come down when a new model emerges. For that reason, if you’re looking today, the G4 is definitely worth considering for the budget conscious. If you want something more recent, then the Honor 6X and Lenovo P2 are both worth a look too.

Alternatively, if you’re set on a Moto G, then the Moto G5 Plus is the pick this year. It’s better in every way – but it is £80 more.

The Motorola Moto G4 is the latest in a long line of successful budget smartphones for the company, stretching all the way back to 2013, but it has its work cut out in 2016. With rival manufacturers upping the quality of their budget handsets over the past 12 months, Motorola needs to do something special to maintain the Moto G4’s position at the top.

Lenovo (the new owner of the Motorola brand) hasn’t made life any easier for the Moto G4, however, by bumping up the base price. The cost of 2016’s Moto G is £169 inc VAT, up £20 on last year’s Moto G (3rd gen). That might not sound like much – it’s the price of a small round of drinks in central London, or a Domino’s Extra Large pizza – but it represents a 13% rise, which is not an insignificant increase when potential customers are likely to be on extremely tight budgets.

What does that extra money get you? The big gain is a larger screen. The Motorola Moto G4 has a 5.5in display, making it a whole half-inch bigger than last year’s model. It’s now up there with the giants of the smartphone world such as the OnePlus 2 and the iPhone 6s Plus in terms of its dimensions and, there’s no denying it, it’s one hell of a slab.

Rather impressively, however, Motorola hasn’t just upped the size without considering the consequences. At the same time as enlarging the screen, it has slimmed down the case significantly, and it now measures 2mm thinner than the Moto G3. The Motorola Moto G4 is a mere 9.8mm thick, weighs 155g (that’s seriously light for a 5.5in phone), and best of all it feels sturdy with it, with a softly curved metal frame surrounding the screen adding to the high–quality feel.

In terms of the overall aesthetics, the Moto G4 isn’t as brash and loud as previous Moto G handsets either and, for me, that’s a bit of a shame. I loved the rounded contours, ribbed rear panel and bold camera surround of last year’s model, and the more subtle look of this year’s Moto G4 feels like Lenovo is playing it a bit safe.

Still, if the plain black and silver finish you see in the photographs here doesn’t float your boat, it is at least possible to customise the Moto G4 via the Motorola Moto Maker website. In all, you have eight rear-panel colours to choose from (dark fig, foam (a kind of pastel green), chalk white, raspberry, deep sea blue, pitch black, cobalt blue and lava red) and five “accent” colours (metallic fine gold, metallic pink, metallic silver, metallic ocean and metallic dark grey) which should give you ample opportunity to add a bit of personality.

The only big downer when it comes to the design is that the Moto G4 isn’t IPX7 water-resistant like the Moto G (3rd gen). It’s still splash-proof, courtesy of a special coating, but don’t go dropping it in the bath.

It’s also mildly disappointing to discover that there’s still no NFC or fingerprint reader (you’ll have to stump up for the Moto G4 Plus if that’s on your shopping list), so you won’t be able to take advantage of the wonders of Android Pay.

Still, there is at least support for dual SIM, a feature I find useful handy for travel abroad. Pop a second SIM in and you can set which SIM is the default for data, thus avoiding potentially expensive roaming costs. And yet you’ll still be able to receive phone calls and SMS messages as normal on your day-to-day phone number.

You’ll find the second SIM card slot right next to the primary one beneath the clip-off rear panel, and settings for the two cards in Android’s settings menu under SIM Cards. 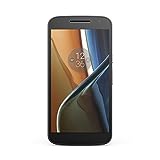 The key reason for the Moto G family’s success has been the combination of sensible design and build quality with a keen sense of value, and the Moto G4 maintains that tradition. Inside is an octa–core Qualcomm Snapdragon 617 running at 1.5GHz, and this is backed by 2GB of RAM and either 16GB or 32GB of storage.

First impressions of the phone are that it’s pretty responsive, but with the odd glitch here and there. There’s some lag while zooming in and out of images in Google Photos, while scrolling quickly through image-heavy websites isn’t as ultra-smooth as on more expensive handsets with 8xx-series Qualcomm chips.

There’s nothing here to make you grind your teeth or curse under your breath, however, and in the benchmarks, the Moto G4 is clearly faster than last year’s model.

In the Geekbench benchmark, the difference between last year’s third-generation phone and this year’s Moto G4 amounts to a 49% advantage in the multi-core test and 26% in the single-core test. Those are both significant differences, and should keep the phone responsive for some time to come.

In GFXBench gaming tests, it’s a similar story with the Moto G4 gaining a 43% advantage over its predecessor in the onscreen (native resolution) test and a huge 71% gain in the offscreen test. In fact, of the budget models I’ve pitched the Moto G4 up against here, it’s the Honor 5X that gets the closest in terms of overall performance. The Moto G (3rd gen) is significantly slower across the board.

On battery life, however, the Moto G4 has overall performance sewn up. Although the Qualcomm Snapdragon 617 is only a 28nm part, it seems to be highly efficient and, coupled with a 3,000mAh battery, comfortably delivers a day of moderate use. When we ran it through our standard video-rundown test, the Moto G4 lasted 13hrs 39mins, which is an above-average score and almost three hours longer than the Honor 5X lasted in the same test.