Microsoft launched its Skype Lite app for low-end Android smartphones in February this year specifically for Indian market. At the time, the company demoed the upcoming Aadhaar verification feature. On Wednesday, the company added Aadhaar integration to the app with its latest update.

For those who are unaware, Aadhaar is a 12-digit unique identity number based on biometric and demographic data for Indian residents. With Skype Lite’s Aadhaar integration, users can now identify themselves on request during video calls. Users will be prompted to enter their Aadhaar number, and it will be shown to the other party after the Unique Identification Authority of India (UIDAI) database is queried. 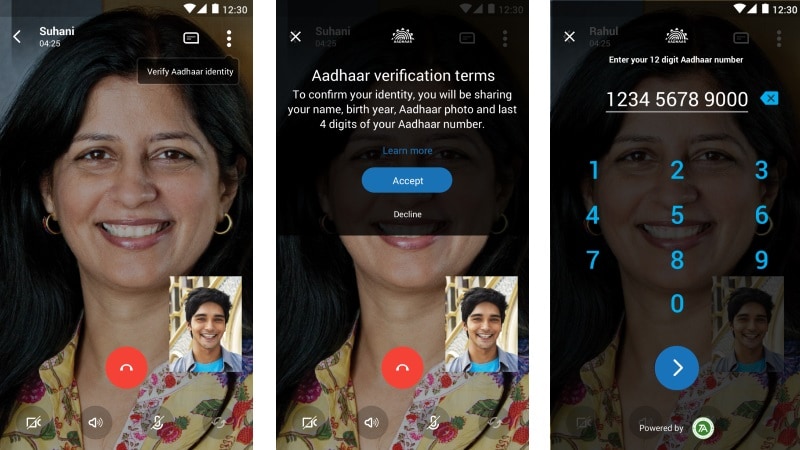 With the latest update to Skype Lite, either of the video call participants can request Aadhaar verification. For identity confirmation, users need to click on “Verify Aadhaar identity”, enter their 12-digit Aadhaar number and then authenticate with a one-time password sent via SMS. After validating this information once, users will be able to share this pre-selected information with other users as well.

However, the company says, “Skype will not store any Aadhaar information and as always, your personal information-including your video and audio conversations -is securely encrypted.”

If you are wondering how this integration would be of use, think of a situation where you need to place a video call to a government representative or an important business client. In this situation, with the help of Aadhaar verification, you will be able to confirm the identity of the person available on other side of the video call before you share sensitive confidential information with them.

“By using Aadhaar, both parties can verify their identity at the beginning of the call to prevent impersonation fraud,” the company said in its blog post.