Samsung’s rumoured Galaxy Tab S3 tablet, which is expected to be launched by the company at MWC 2017, has now been leaked again in images and the device’s specifications have also found their way onto the Internet. Samsung’s MWC event is set to begin at 7pm CET (11:30pm IST) on Sunday. 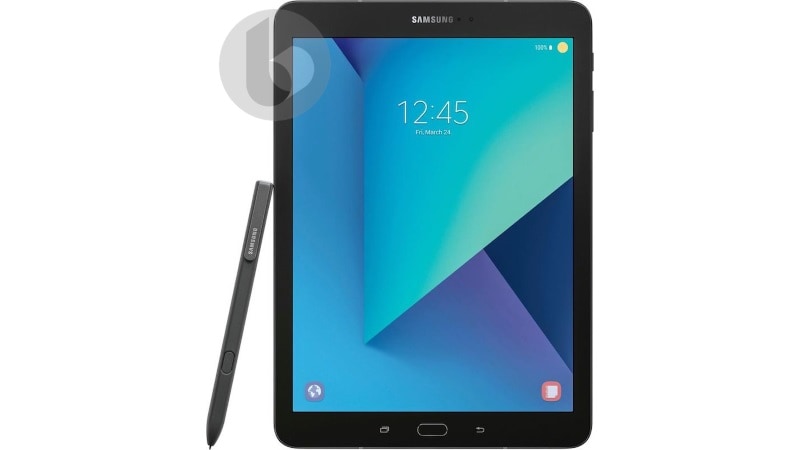 Rhe renders leaked earlier this week showed that the tablet will come with Samsung Notes app, indicating presence of a stylus, and the newly leaked images show the stylus alongside the tablet. Apart from Galaxy Tab S3, the South Korean company has also been tipped to be working on its Samsung Galaxy Book Windows LTE tablet.

As per the newly leaked images, provided by TechnoBuffalo, the tablet will come along with a rather bulky but advanced looking stylus that resembles Microsoft’s Surface Pen. Just like the keyboard accessory leaked earlier, it is currently unclear if the stylus will be packed with the tablet or sold separately by the company. Another interesting aspect leaked about the device, revealed from the new images, is that it will feature audio tuning from AKG.

Almost all specifications of the tablet have been claimed to be leaked by MySmartPrice, along with another image. As per the leaked specifications, Samsung Galaxy Tab S3 will sport 9.7-inch Super AMOLED display with a display resolution of 2048 x 1536 pixels and capable of playing back HDR content. The Galaxy Tab S3 has been tipped to run Android 7.0 Nougat-based TouchWiz UX and is expected to be powered by a 2.15GHz Qualcomm Snapdragon 820 quad-core chipset. The upcoming Samsung tablet is expected to pack 4GB of RAM and 32GB of built-in storage, which is expandable up to 256GB with microSD card.

In terms of optics, the Galaxy Tab S3 sports a 13-megapixel rear-facing camera with autofocus. At front, it packs a 5-megapixel front-facing camera. The tablet reportedly measures 237.3x169x6mm and weighs 429 grams (the LTE variant has been tipped to weigh 434 grams).

The tablet reportedly features a front-facing home button embedded with fingerprint scanner that can be used to unlock the device. MySmartPrice also reports that the tablet will feature four AKG-tuned loudspeakers (two at top and two at bottom of the device when held upright).

As per the MySmartPrice report, the keyboard accessory by Samsung connects to the tablet by pogo pins and will not be bundled with the device but sold separately.

In the meanwhile, MSPowerUser has some additional details to share about the Samsung Galaxy Book that was leaked earlier this week. The publication tips it will come with LTE support, and sport a 10.2-inch AMOLED display. It’s also said to bring Air Command support for the S Pen.