Gadgets The Best Tablets for Gaming

From the very first Nokia 6610, games have been an important part of the mobile onset. Nowadays, Snake and Maze have been replaced by the likes ofFlappyBird, CandyCrush and 2048. There’s a limit to how satisfying a gaming experience can be on a small screen with limited functionality, however.

Since you probably can’t be carrying your PC around with you, and laptops are awkward to open up on the commute home – tablets are your solutions for when you want to play bigger games on-the-go.

Perhaps you want to buy a tablet for the sole purpose of maximising your gaming experience, or maybe you just want to keep a tablet’s gaming compatibility as a mere consideration when choosing your new tablet. In either case – here are some devices renowned for their appeal to gamers.

With sharp resolution and high quality front-facing speakers, this Nvidia tablet is built with gaming in mind. Nvidia offers a system-on-a-chip (SoC) called Tegra that one can insert directly into the tablet. These chips enhance the performance of games. Included with this tablet is a stylus, however you will have to pay for the $60 controller separately. 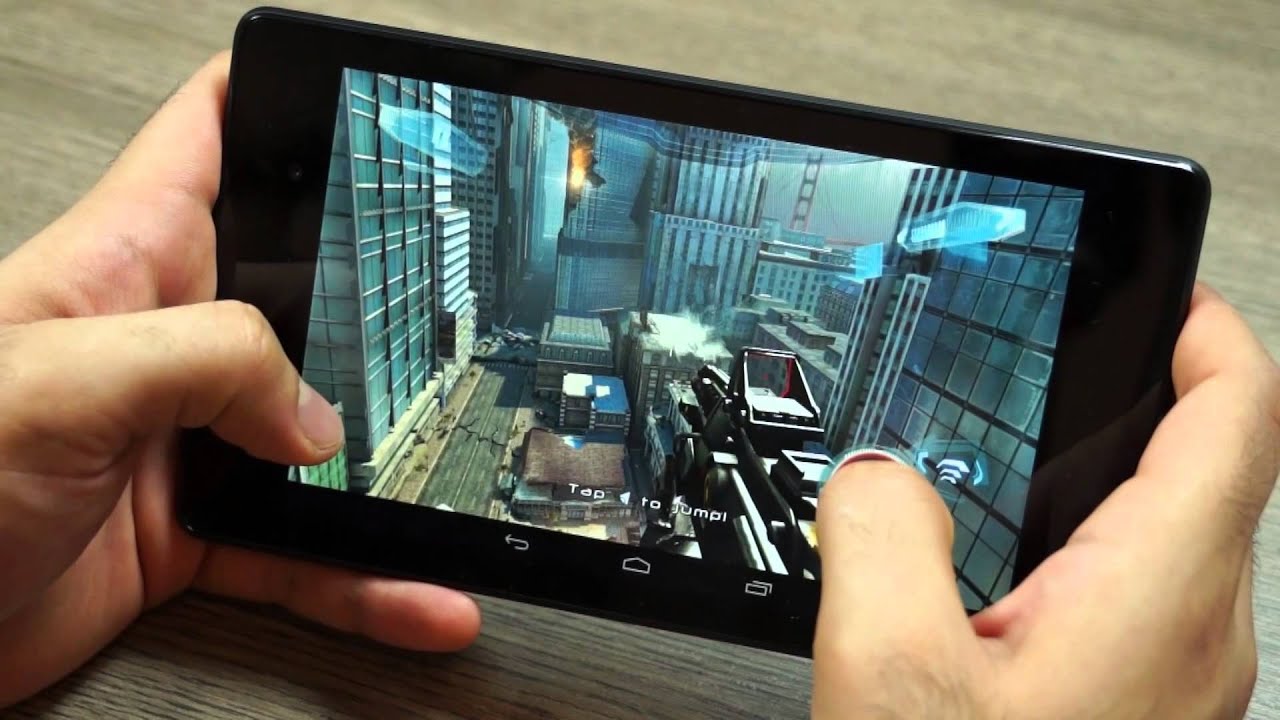 One of the best things about this tablet is how slim and compact it is, making it comfortable to hold during longer gaming sessions. Whilst this device doesn’t have built-in physical controls, the software is unbeatable. As if that wasn’t enough – it has a sleek, snazzy looking design.

The super sharp screen and handy navigation options are just part of what makes this tablet a winner for gamers; it’s the Snapdragon 800 system-on-chip which makes it truly great. The frame rates delivered by the device easily matches anything you’ll see on an Android tablet – not to mention the fact that it’s one of the more reasonably priced tablets on the list.

If you spend a lot of time on Hearthstone or playing card games on android poker sites then you’ll find the lightweight design and responsive navigation makes this tablet a breeze for gaming. Besides its precise controls and comfortable shape, you’ll of course also have access to Google Play and all the wonders this app store has to offer.

As the fastest gaming tablet in the world – this one’s for the impatient gamer. The general performance is impressive considering how ultra-thin the tablet is. It also packs a powerful A8X chip. Simply put; if speed is a priority then there’s not a better tablet to get. It’s perfect for fast games like Real Racing 3 and Modern Combat 5.

One of the few Dell devices which matches the iPad Air in its featherweight sleekness; this tablet operates smoothly and has a front-facing speaker plus a stereoscopic camera on its back.

This one’s a little chunkier than the rest, but also one of the most powerful tablets on the list – yes, even more so than the iPad! For serious gamers who do a lot of downloading, the Lenovo Yoga Tab is the way to go even if the design feels a little less comfortable to hold. On the plus side, the chunky battery bottom collapses into a stand so that you can conveniently place it upright on a flat surface.

Gamer or not, always take into consideration weight, screen size and operating system when deciding on which tablet is best for you. Most will agree that the iOS offers the best selection of games, however keep in mind that you can run more PC games on Windows-based tablets such as those offered by Dell and Lenovo. As a final piece of advice, try getting your hand on a sample of the tablet you’re interested in before making a purchase, so that you can make sure it feels comfortable to hold and navigate with.