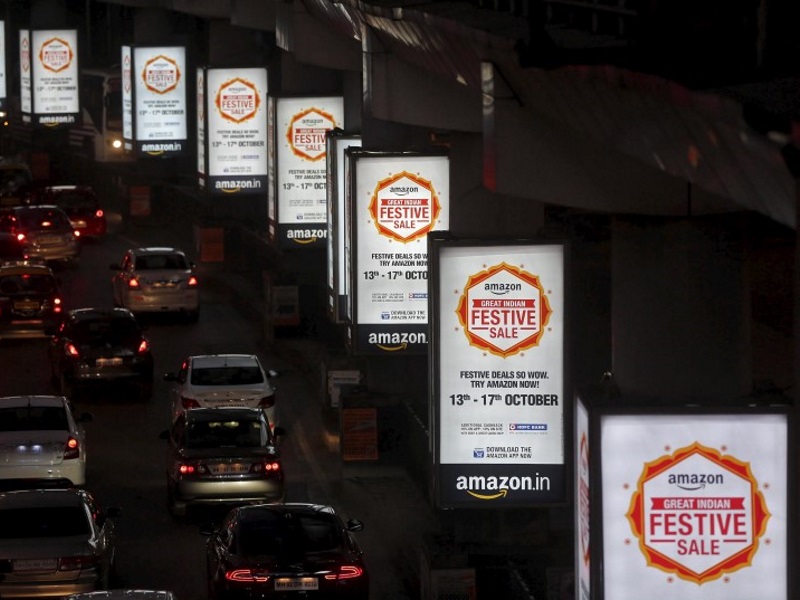 Amazon.com Inc could emerge as the biggest winner from one of India’s most important festive – and shopping – seasons, after the e-tailer offered steep discounts, swift delivery and even gold bars to grab market share.

The month-long festive season, which began on Monday, culminates in Diwali, or the Festival of Lights, but the first nine days are considered an especially auspicious time to make big purchases.

Analysts say e-commerce firms in India could make as much as a quarter of their annual sales during this period, with the global experience, logistics network and deep pockets of Amazon putting it in a good position to grab customers from local market leader Flipkart and smaller firm Snapdeal.

“Amazon has been closing in,” said Harish Bijoor, an independent brand expert and business analyst. “It has global play and is very nifty in terms of delivery.”

India currently contributes the most new customers to Amazon outside the United States, the company said, making growth there a priority. The e-tailer launched in India in 2013 and has invested at least $2 billion (roughly Rs. 12,991 crores), especially in logistics, to avoid being overtaken by local firms, which is what happened in China with Alibaba Group Holding.

E-tailers have splashed out on promotions for this year’s festive shopping week as it coincides with signs that consumer spending is picking up after two consecutive years of slowing growth for Asia’s third-largest economy.

Amazon offers shoppers next-morning delivery for late-night orders and the chance to win a kg (35 ounces) of gold every day for five days in a country that is a voracious consumer of the precious metal.

In a statement, it said the number of transactions on the first day of its “Great Indian Festive Sale” was a record high, but like its rivals it declined to give specific figures.

Flipkart also expects its “Big Billion Days” sale, which customers can access only through its smartphone app, to be “the biggest shopping event of the year”, said Mukesh Bansal, head of the company’s commerce platform. Last year, Flipkart’s website crashed during its maiden festival shopping event.

Bansal said Flipkart had invested in improving its delivery network and overall logistics this year, providing food, beds and even an ambulance on stand-by to keep the business running.

Snapdeal also highlighted its improved logistics and booming demand. “With the huge surge in sales volumes, over 5 million orders have already been shipped out of Snapdeal until now,” it said in a statement.