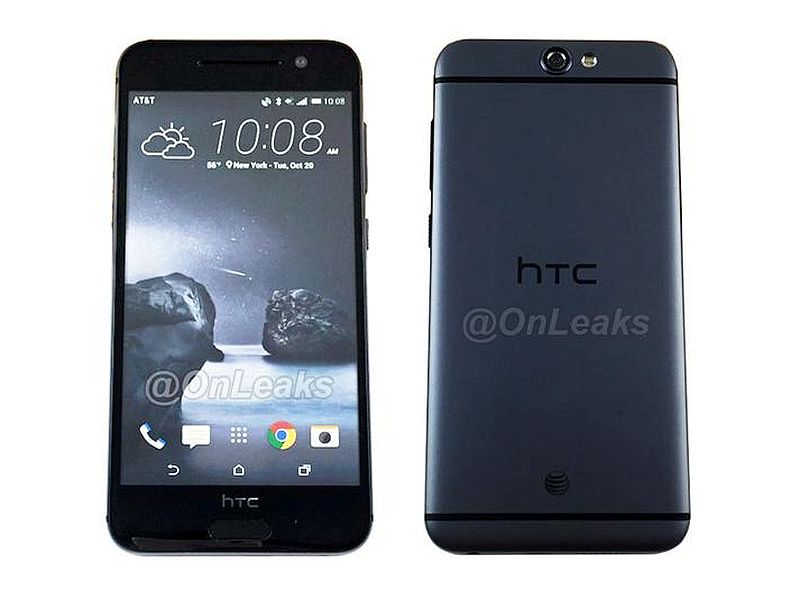 We may have already seen HTC’s One A9 aka HTC Aero in several leaked images sporting iPhone-like design. Now, a fresh bunch of leaked images claimed to be from the alleged HTC One A9 dummy unit has surfaced. Interestingly, the leaked images of the One A9 show the home screen with October 20 date, which is also supposed to be HTC’s next event.

Corroborating previous leaked images, the new images show the HTC One A9 featuring bold curved edges and two wireless antenna lines running on the top and bottom edges, reminiscent to the iPhone. The front panel can also be seen with a physical button at the bottom that might double up as a fingerprint sensor as well. The rear camera on the One A9 can be seen placed on the top centre of the handset, unlike what we have seen in majority of Android smartphones where the rear camera module is located at a corner. The right edges can be seen in the leaked images housing the power and volume rocker buttons. The left side of the handset includes slots for SIM card and microSD card. In one of the leaked images, the HTC One A9’s home screen can be seen with AT&T icon in the top bar alongside usual apps for dialler, message, menu, Chrome, and camera on the screen. The new leaked dummy unit images come courtesy of @Onleaks.

Considering that HTC has already scheduled an October 20 launch event, we can expect the company to reveal the HTC One A9 aka Aero then. For the October 20 event, HTC had started sending press invites that said, “Meet the Marshmallow from HTC,” tipping that the company’s upcoming device would run the latest Android OS. The HTC event will kick off at 12pm ET (translating to 9:30 PM IST).

Based on preliminary leaks, the HTC One A9 is likely to feature a 5-inch full-HD (1080×1920) resolution Amoled display; 2GB of RAM; 16GB of inbuilt storage; expandable via a microSD card; 13-megapixel rear camera; 4-UltraPixel front-facing camera with OIS and BSI sensors, and a 2150mAh battery. It is also said to sport a metal build and 7mm thickness.